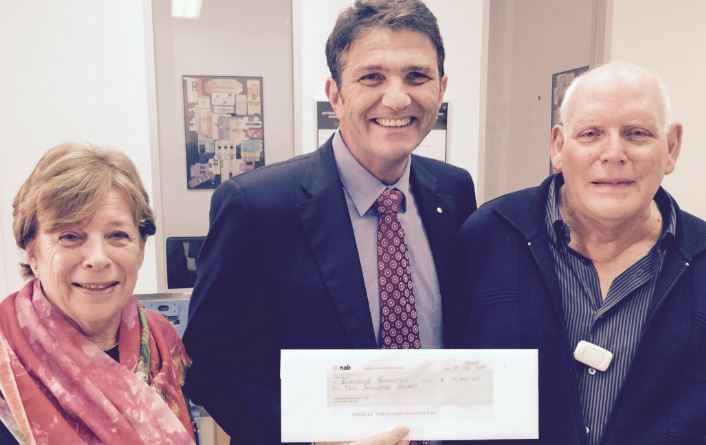 Snowdome would like to pay tribute to our first-ever donor, Arie Rubinstein (at right in picture), who has died from myeloma after an 8 year battle.

From 2007 until 2015, Arie was a patient of our co-founder Professor Miles Prince and, according to Arie’s wife Tova, the two men had a special relationship from the moment they met. “I think they fell in love!”, Tova says with a grin.

In Miles’ opinion, Arie was a man who had great strength of character and approached life with a ‘no problem is too big to solve’ attitude. This attitude was shared by his very close family and Miles would often ‘bump’ into Arie, Tova and their four children outside of his consulting rooms – either running around the Tan track at the Botanic Gardens, in the street or at the gym. This lead to a closer than normal patient/Dr relationship which was based on great respect and honesty, says Miles.

Arie and Miles would have many conversations over the years. During the first few years of treatment, Arie came to understand Miles’ frustration at the lack of funding to translate research into new drugs and treatments for blood cancers. It was during this time that Miles and other co-founders, Grant Rutherford and Rob Tandy, were working hard to establish Snowdome. When operations officially commenced in 2010, Arie was keen to kick-start the fundraising with a donation.

Arie continued to live life to the full as he battled his disease. As a former teacher of History, he loved to travel the world and didn’t let his illness interrupt his love of life. He had many passions, one of which was the factory he owned and operated alongside Tova that specialised in cardboard packaging. He once told Miles that if he visited the factory he and Tova would give another donation to Snowdome. No guessing as to what Miles did! Tova recalls that Miles turned up to the factory and proceeded to inspect and climb over and around some of the monstrous manufacturing machines all while wearing a business suit!

Arie died a month before his 69th birthday, too young and too full of life. Unfortunately, myeloma continues to remain largely incurable and funds are desperately needed to enable research and clinical trials to continue.

We thank you Arie – for your understanding, generosity and belief in Snowdome.