“Prepare yourselves for the worst and hope for the best”. These words still echo from Dr Henry Eckhart, the Royal Children’s Hospital senior Haematologist and his team, Dr Keith Waters and Dr Karen Tiedemann as they presented two young and somewhat naïve parents with their son Benjamin’s diagnosis, Acute Myeloid Leukaemia (or the beast as I prefer to call it).

Ben was 29 month’s old, a very healthy child, at least he was ten days prior, and now his little body was bruised, swollen, paralysed, nauseated and exhausted. The diagnosis was surreal, the moment surreal and so were the 16 months that followed. We didn’t have a clue. We had never heard of Leukaemia, nor were we aware of any family history.

This beast is an adult Leukaemia. AML is rare in children and the likelihood of survival was 20% in 1980 although in reality and through my research to date, it was probably less than 10%. Treatment began immediately – two months of intense and debilitating chemotherapy inclusive of weight loss, hair loss, appetite nil and prevailing nausea. Life for this humble family was suddenly inside out and upside down, on hold, yet the world continued on around us. The RCH 6E kids cancer ward we called home for the next two months, in the hands of the professionals because everything else was out of our control. There was nothing, absolutely nothing we could do. Your child gets sick, a cold, flu, they fall over but they recover, don’t they? Not the cancer kids or at least rarely in 1980. The babies, the toddlers, the in-betweens, the teenagers, a ward filled with bald kids, martian like, awaiting death and the desperate families awaiting a cure. 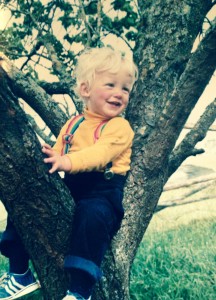 I used to gaze out of the window from 6E contemplating life, watching the world go by and thinking no one out there has any idea what is going on in here. 6E was another planet and we had been taken hostage.

Ben entered remission following eight weeks of chemotherapy and we returned home to country Victoria, however, he required weekly visits to Melbourne for ongoing treatment. My husband returned to work for some normality so Ben’s grandmother travelled with us every week for the 10-hour return journey. It was a long journey but it never seemed to bother us as we treasured every minute of every day Ben was in remission as a gift.

Ben’s vocabulary was well ahead of his years making him a good communicator and a delightful cherub in every way. He was never demanding and presented with a death sentence he coped far better than anyone in his acceptance of regular transfusions, lumbar punches and ingestion of drugs so diabolical that to survive the beast, never mind the treatment, now required a miracle. There is a lot of merit in living each day as it comes because that is all we had, he was alive and anything else was unthinkable.

Ben relapsed almost 12 months to the day from diagnosis. As we were in the hands of the gods we without question said yes to a two week intravenous drug called the Homoharringtonine, a drug in 1981 still in its trial stage but that did not stop us as we prepared ourselves for the worst and hoped for the best. No favourable result was gained.

We were now about to make the biggest decision of our lives in consultation with our team at RCH. No further chemotherapy. In 1981 there were no bone marrow transplants performed, advancement in cancer research was slow and the chances of further remission, unlikely.

Ben’s journey was final by Sept 20, 1981. He died at home, in his mother’s arms, surrounded by loving family.

An enormous emotion of emptiness combined with relief flowed. Emptiness as you cannot imagine life without your child and relief that Ben no longer had to endure the pain and suffering that follows when there are no veins left to inject. He was free.

As his mother, I always felt privileged to have him in my life to love and care for, even if only for 3 years & 9mths. I still carry him in my heart like it was yesterday even though he would now be coming up to 37 years of age, he was my first-born and nothing can equate to that.

Many parents have lost a child and statistically less today from Leukaemia than historically and whilst one learns to live with such a loss, one never accepts it. Ben brought great pleasure to many lives and indeed changed many lives around him, forever. If he was diagnosed today he would have a 50% or greater chance of survival thanks to research, modern medicine and importantly, the families determined to make a difference by reminding us all that unless the beast is tamed it will continue to consume the lives of many.

Dee’s step-daughter, Gina, is an Ambassador for the Snowdome Foundation.