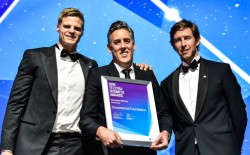 An innovative partnership between two Victorian charities has been named the inaugural winner of the Charity category in the 2016 Victorian Telstra Business Awards.

The collaboration of the Snowdome Foundation and Maddie Riewoldt’s Vision, who both raise funds to discover new treatments in the fight against blood cancers/blood disorder syndromes, were last night recognised for their innovative approach and entrepreneurial spirit within the charity sector when named as  the Victorian winners at the Awards Dinner in Melbourne.

Snowdome co-Founder, Professor Miles Prince AM*, says the win is a fantastic validation of all the hard work that has gone into building a new business model in the charity sector.

“We were really thrilled to be short-listed as one of the most outstanding not-for-profits in the state but to be included as a finalist amongst six other fantastic charities and now win the category is nothing short of humbling and amazing,” he said.

Snowdome has been fighting blood cancers, namely leukaemia, lymphoma and myeloma, since 2010. Uniquely, the Foundation funds the gap between basic research of treatments and cures (supported by government) and the large trials (commissioned by pharmaceutical companies). “Our Foundation gives blood cancer patients and their loved ones real hope where they can’t normally find it. That’s our difference. The funds we raise go from the clinic to the bedside now, helping people get on clinical trials, helping them gain access to new treatments.” Professor Prince said.

“The exciting thing is the research breakthroughs we are seeing that are identifying new or novel ways to treat blood cancers. Our generous donors allow us to fund the translation of this ground-breaking research from the lab to clinic, to fund the infrastructure required to run the clinical trials of new treatments and ultimately provide hope for the 12,000 Australian men, women and children who are diagnosed with blood cancers every year,” Professor Prince continued.

In 2015, Snowdome supported the establishment of Maddie Riewoldt’s Vision, a charity dedicated to finding a cure for Bone Marrow Failure Syndromes which are considered part of the blood cancer spectrum.

Named after his beloved sister who died in February 2015 from Bone Marrow Failure Syndrome, co-Founder Nick Riewoldt*, says that Maddie died with one wish – that no one ever has to experience what she did. That meant urgently finding new treatments.

“The recognition tonight tells us that we are someway to fulfilling her wish,” said Riewoldt. “Collaborating with Snowdome and being backed by their passionate Board and experienced committees meant that we were able to act quickly with solid business decisions and keep our eye on our purpose. We have raised $1 million and granted over 50% of the funds into three significant medical research projects in less than 12 months,” he said.

Being able to leverage their respective strengths, combine resources and reduce costs while working towards a similar goal were the drivers behind this innovative partnership. Having the Snowdome Foundation’s support and existing governance in place meant Maddie Riewoldt’s Vision was able to launch in rapid time.

Together, the collaboration’s vision and purpose aligns to see 85% of funds raised from private philanthropic donations and subsequent ‘matched’ government funding go towards finding cures and treatments. To date, the two charities have granted almost $11.5 million to medical research projects, enabled 13 different clinical trials of new treatments and allowed 229 Australian patients to gain access to hope.

“The recognition of the work we’ve done to shine the spotlight on the need to urgently find cures for blood cancers and bone marrow failure syndromes is very special,” said Professor Prince. “This award is testament to the innovation of the collaboration, the trust of our philanthropic donors, the passion of our professional volunteers and the extraordinary work by Australia’s bright young stars in medical research.”

“Most importantly,” Riewoldt continued, “this award will make that spotlight shine brighter which will ultimately provide more hope for all Australians suffering from these insidious blood-related diseases.”