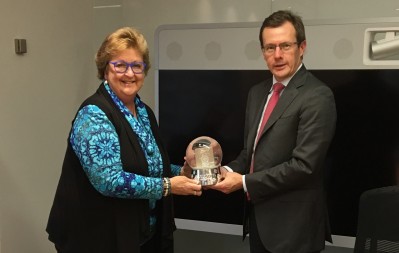 The ‘marriage’ of Snowdome and Cisco dates back to December 2012 when members of Snowdome’s Board met with Cisco to discuss a ‘blue sky’ idea around the concept of a fundraising event you could attend without actually attending.

How could this be done utilising 21st century technology and how do you attract the corporate market who want to support charity but don’t have time to leave their office?

This, according to Cisco’s Ken Boal and Tim Fawcett, was a concept “right down our alley” and they jumped on board so enthusiastically it had Snowdome Board members in joyful shock!

Using technology differently is part of Cisco’s approach to business. They were intrigued by the idea and worked tirelessly over the next eight months to make the Snowdome Foundation ‘Great Shake-Up’ virtual event a reality. At lunchtime on a Wednesday in August 2013, Snowdome was able to broadcast a one hour televised fundraising/infotainment program about blood cancers directly into the boardrooms of Australian businesses. To our knowledge, it had never been done before. And it definitely wouldn’t have been possible without Cisco’s partnership, vision and know-how.

Three years and three ‘Great Shake-Ups’ later, this partnership has helped Snowdome raise almost $2.5 million to fight blood cancers. It also introduced Snowdome to other pro bono partners such as Telstra, Village Roadshow, Channel 7 and the AFL who have helped ensure the future success of the ‘Great Shake-Up’.

Recently, members of Snowdome’s Board met with Cisco and presented Vice President Ken Boal with a ‘Founding Partner’ snowdome in appreciation of their wonderful support. Thank you Cisco!