Late in 2014, the Snowdome Foundation was contacted by two different parties with a common cause. They both wanted to fundraise for Snowdome. Both parties couldn’t be more different.

One was a group of dedicated cyclists who intended to tackle the fiercest slopes New Zealand could offer – in the name of charity. The other was a well-known actor & comedian who had a surplus of props & costumes belonging to some of his infamous characters and wanted to sell them – again, in the name of charity.

The combined total from the fundraising efforts of the Fireflies Antipodes Tour of NZ and Chris Lilley’s auction of props and costumes from Ja’mie: Private School Girl, Jonah from Tonga & Angry Boys has reached just over $33,000. A wonderfully generous gift to Snowdome from both parties. 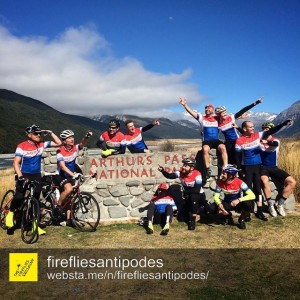 The Fireflies Antipodes Tour:-
Every year for the past thirteen years, the Fireflies have ridden their bikes through the French Alps, from Geneva to Cannes to raise money for cancer research. The charity was started by Sandy Scott, wife of Ridley Scott the film-maker and her son, Jake Scott, of RSA Films. Their daughter contracted Leukaemia at a very young age. Thankfully her story is one of survival.

Jake Scott is an avid bike rider. Sandy, whose wisdom knows no bounds, told Jake if he’s going to ride, he should do it for a cause, something that’s close to their heart. Thirteen years and AUD $2.8 million later, that passion has turned into research dollars for leukaemia and lymphoma in the UK and abroad.

The Fireflies motto is, ‘For those who suffer we ride’. The hardship they endure while tackling the ridiculously steep mountains of the French Alps is nothing, they imagine, to what a cancer sufferer goes through. They are right.
This year, with the help of Wilf Sweetland, an Australian ‘Firefly’, an Antipodes tour was launched. Eleven riders completed the Antipodean tour which covered 800kms over six gruelling days from Christchurch to Queenstown. “The ride was an epic affair,” says Wilf. “Physically and mentally tough, it challenges you in ways you may never have imagined yourself experiencing. It is the most rewarding event I have been involved with, creating life-long friendships from around the world. We are absolutely thrilled that our first tour will raise money for Snowdome.”

The tour concluded on February 14th and Wilf was extremely proud to announce they’d exceeded their fundraising target by 136% by raising almost $30,000 for Snowdome. 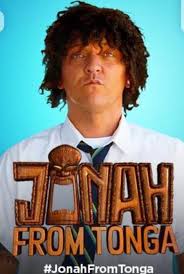 Best known as Ja’mie: Private Schoolgirl and Jonah from Tonga, actor and comedian Chris Lilley has very generously donated 100% of the proceeds from the auction of a selection of costumes and props to Snowdome. Holding the auction on Ebay over the Christmas and New Year period, the auction of Ja’mie’s school dresses, jumpers and school bags plus Jonah’s school clothes, beanies and other props raised almost $3,000.

Thank you Chris for your innovatively generous donation!

If you would like to fundraise for the Snowdome Foundation, please email us at info@snowdome.org.au or call 0477 300 030.