Fundraising Fireflies are off and away!

They’re off and away! 800kms over 6 gruelling days through New Zealand’s beautiful but challenging countryside.

Thank you Fireflies. You told us your fundraising goal was $22,000 but at last report, you’ve far exceeded this! An amazing effort and contribution. The Snowdome Foundation thanks you for ‘making hope real’ for Australians with blood cancers. We also salute you and hope you all stay safe and ride like the wind! 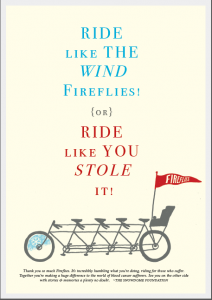 Wilf is the Managing Director and Executive Producer of the Sweet Shop production company in Australia. The Sweet Shop generously produced a story for the Snowdome ‘Great Shake-Up’ last year but now he wants to help us raise funds through a unique organisation called The Fireflies, of which he plays a big part.

Every year for the past thirteen years, the Fireflies ride their bikes through the French Alps, from Geneva to the Festival of Creativity in Cannes (Advertising) to raise money for cancer research. The charity was started by Sandy Scott, wife of Ridley Scott the film-maker and her son, Jake, of RSA Films. Their daughter contracted Leukaemia at a very young age. Thankfully her story is one of survival.

Jake Scott is an avid bike rider. Sandy, whose wisdom knows no bounds, told Jake if he’s going to ride, he should do it for a cause, something that’s close to their heart. Thirteen years and AUD $2.8 million later, that passion has turned into research dollars for Leukaemia and Lymphoma in the UK and abroad.

After 1,000 kms, 24 mountains, 25,000 metres of vertical ascent over 8 days, they ride to the steps of the Palais de Festival in Cannes (think Cannes Film Festival) through a triumphant arch of red and yellow balloons and the cheers of 100 close family and friends. This year, our foundation co-founder Grant Rutherford, his wife Melissa and their daughter Lily were coincidentally there to greet them. And what they witnessed was quite inspiring.

There was a ceremony, many tears, the predictable waste of good French all over everyone including the asphalt, and stories of cancer survival. The Fireflies motto is, ‘For those who suffer we ride’, apparently very apt for the looks on their faces as they arrived. One rider had Leukaemia a couple of years back. His mate, a fellow rider, donated bone marrow. It didn’t work. They tried again. This time it worked. They were both there on the steps. Grant admitted it was goose-bump stuff. It knocked him off his feet. These guys and girls had just been through something amazing together. The hardship they endured was nothing, they imagined, to what a cancer sufferer goes through. They are right.

So Wilf has decided to bring the tour to the Antipodes. New Zealand to be specific. The Antipodean tour covers 800kms over six gruelling days from Christchurch to Queenstown. And he wants Snowdome to be the benefactor. So with the blessing of Sandy Scott it’s all going to happen. Early in 2015 they ride for Snowdome and Chloe Rutherford (in whose name the Foundation is honoured) and the 11,500 people every year in Australia who are told those terrible words, words that are completely undeserved …. “you have a blood cancer”.

We will be there to welcome them with open arms.