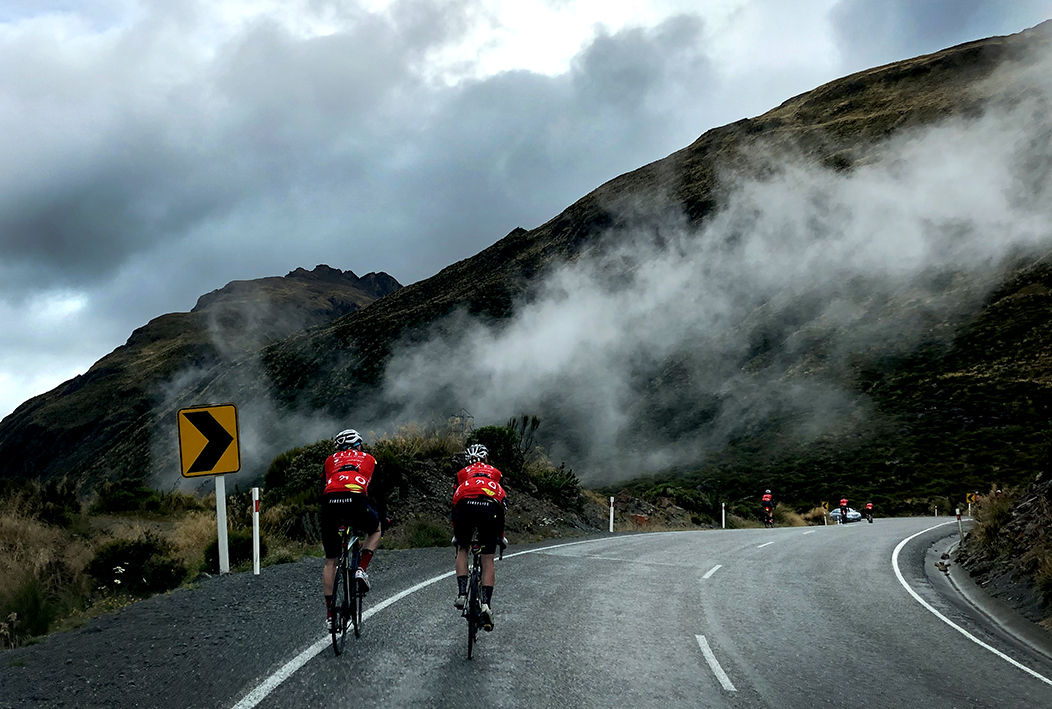 The FireFlies Antipodes suffered on their bikes for 800kms in order to raise funds for blood cancer research. Snowdome co-Founder Grant Rutherford joined the FireFlies, here is his story.

For those who suffered, I drove.
The Fireflies Antipodes ride from Christchurch to Queenstown in New Zealand is done. It was done and dusted days ago on February 23. And I promised others and myself I would write a wrap-up. But why has it taken this long? Why is it seemingly so hard? Why am I wasting precious time cleaning out a cupboard at home that doesn’t need cleaning in the first place?
I knew writers-block would set in (read: procrastination). I convinced myself halfway through the tour this would happen, that when the time came I wouldn’t know what to write about. A self-fulfilling prophecy no doubt, but after a lot of introspection about the tour, I think I have the answer.
I’m a pretender.
What does that mean? Let’s be honest. I didn’t do much. Granted I wasn’t pretending to do much but the fact remains I didn’t do a lot, not in comparison to an incredible bunch of people.
The Fireflies did all the riding, all 800kms of it. They were up at 6am everyday, rain or shine (one day 100kms of horizontal rain), strong headwinds or 24% inclines. For six days, eight hours a day, they did it tough. They never complained. They knew what they were doing it for, blood cancer sufferers and the absolute belief that they should live longer, more prosperous lives. ‘For those who suffer we ride’ is their call to arms. For the riders who suffered, I drove. Easy job. Hardly suffering. Listening to the drone of the diesel at 30km per hour for six days did make me slightly agitated. One day in the middle of paradise, Mike the Mechanic (and rider) dropped back to my vehicle to tell me the diesel engine was spoiling what was perfect serenity. I can’t even drive right.
Then there was the support crew of Loren and Margi who did all the hard work behind and in front of the riders. The first thing was to get the tour sorted and the riders to Christchurch. Number two was making sure their well being, mental health and appetites were all satisfied. And believe me, it’s hard to keep a rider satisfied when all their bits were suffering. They packed trucks, forward scouted morning tea and lunch stops, prepared the food, organized accommodation, organized dinner. But they too never complained. First up and last to bed. They got on with it like everyone else, for everyone else. They too knew why they were there. All I had to really do was make sure the Fireflies water bottles were full and not run up the back of them. At one point I think I even failed at that task, the water bottle filling I mean.
Lastly, and by no means least were those back at the Sweetshop in Australia. More organizing, blogging every day, uploading photos, booking stuff, always something to do. Like organize the traditional Maori welcome as we arrived at our destination in Queenstown. It reduced me to a blubbering mess. The Sweetshop team all have regular day jobs but then their days started again as our days supposedly finish. They were the machine behind the machine behind the riders. What a wonderful bunch of selfless individuals. They’d never complain about the support car air-conditioning being too cold or the sound of my engine.
So why did everyone do it? It’s all about people helping people, especially those who can’t help themselves. The amazing Lyn Swinburne, founder of Breast Cancer Network Australia, once told me that people don’t give to ‘charities’; people give to ‘people’. That’s how it works or it should work. And there’s nothing more true said about the Fireflies ensemble. Every one of them were giving their all for someone. Late one afternoon everyone sat around and bared their souls. It was incredibly emotional, friends and strangers bonding, dropping their guard and opening up on things we all try to suppress. In some cases it was for the memory of someone suffering right now or someone that passed long ago that could have benefited from what Snowdome is helping accelerate: real treatments and cures. I told my story as co-founder of Snowdome, but everyone already knew. I wasn’t telling them anything new, but somehow made it feel like yesterday that Chloe lost her battle with Leukaemia. For me the fireside was emotionally draining and uplifting at the same time. So why was Mike the mechanic doing the ride? He said it was to get a week off work, but I didn’t believe him.
The Fireflies Antipodes is a charity to which the Snowdome Foundation is the lucky beneficiary of over $40,000 this ride alone and over $100,000 all up. To them and their supporters, I’ll be forever grateful, as will be Australian blood cancer patients fighting the cruellest of battles. But what I’m most grateful for is being part of an incredibly humbling, uplifting, emotional journey. It’s been a real privilege. And my 30kmh driving skills have come a long way too.
The journey gave me a lot of time to think, but reading this you’re probably thinking I wasted a great opportunity to write something good. But after all this, I think I have the answer to why this has been so hard to write about the tour. It’s because I never wanted it to end.
-Grant Rutherford
Snowdome Foundation co-founder